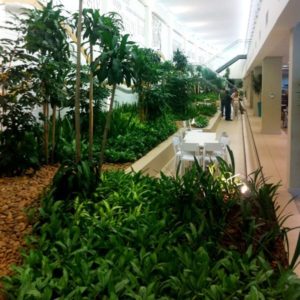 A bland looking office isn’t the most inspirational space for any team to work in, especially if the business depends on coming up with innovative ideas for clients. The good news is that you don’t have to worry about refurbishing the entire space to liven it up. Adding plants into the mix will instantly change the tone of the space, as well as bringing additional health benefits to the entire team. If you’re worried about whether the office gets enough sunlight for plants to survive, we’ve got ten of the best medium light office plants right here, each of which will thrive without having to be in direct sunlight all day.

Affectionately known as the ‘Corn Plant’, the Dracaena Fragrans ‘Massangeana’ is a medium-sized cane plant that sprouts glossy green leaves with yellow stripes. Native to Western Africa, this popular office plant is sturdy with a firm base. Its evergreen status earns it favour with a lot of people around the world. If you’re going to add this plant to your office space, make sure that it is well drained at all times, in order for it to show off to its full potential to everyone.

The Ficus Benjamina ‘Vivian’ is a hybrid plant with variegated leaves that creep along the entire surface area of the plant. A statement plant if we ever saw one, this subtropical gem works for outdoor patios, indoor conference rooms or even as an addition to an executive office. Considering it has a large amount of leaves, it may require more maintenance than others on the list, but when you see it in all its glory, you’ll realise that it is always worth the time.

The Dypsis Lutescens is an iconic plant that has been in homes all over the world, but sadly, its numbers are decreasing and it is approaching near threatened conservation status. For this very reason, we need more people to incorporate them into their office spaces and elsewhere, with the intention of replanting them at a later stage. Imagine the joy of doing this as a team building activity, helping the planet and being able to return from time to time to track its growth progress. 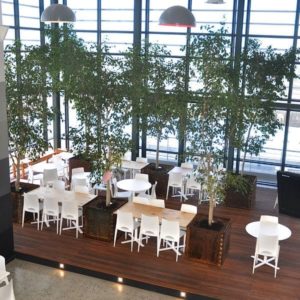 If we were to call any plant gracious, the Ficus Benjamina would be it. Commonly known as the ‘Weeping Fig’, this ficus looks like it is groomed even without much maintenance, which is exactly why it is popular in busy office spaces. It is so popular in fact, that it is the official tree of Bangkok. This plant is a great choice as it is sturdy and steady, and can be the perfect addition to a reception area that houses clients before meetings.

You might have come across the Dracaena Reflexa as the ‘Song of India’ or the ‘Song of Jamaica’ before, but surprisingly, it isn’t native to either of these areas. Originating in Madagascar, this beautiful plant shows off no matter where it is, mostly for the way its leaves join together to create what could be mistaken for an art installation from afar. Similarly to others on the list, it has glossy lush green leaves, but one distinct difference is that they are more narrow than the average office plant.

Most people are familiar with the ‘Banana Leaf Ficus’, more formally referred to as the Ficus Longifolia ‘Alii’. Its common name refers to the long and slender nature of its leaves, which is a trademark that usually comes up a lot with plant experts. This plant is great for an office space as thanks to its Malaysian origins, it can endure all kinds of different conditions. It is also similar in stature to the gum trees, which most South Africans will be quite familiar with.

The Howea forsteriana plant, also known as the ‘Kentia Palm’, isn’t called the most popular plant for indoor gardeners for no reason. It is very easy to take care of, so if your team doesn’t have a lot of experience looking after plants, this might be a good way to help everyone learn with less pressure. The Howea Forsteriana is slow growing, and requires low to medium light. Its stems are green when they are young, and watch out for their grey colour as the plant starts to age.

The Monstera Deliciosa (or ‘Swiss Cheese Plant’) needs no introduction. Chances are, you’ve had one of these in your home, or you have a friend or family member that has one. Native to southern Mexico, this plant has done its rounds in many tropical areas, to the point where it has even become a somewhat invasive species to some regions. Its heart shaped leaves make it an attractive offer for most people, and if the team is struggling to decide what to get, it is probably your safest bet.

If you have a lot of open surfaces in the office, the Ficus Lyrata is a plant you should add to your list right away. This evergreen tree has broad, elegant leaves that allow the plant to grow up to 45cm tall indoors. In the deep forests of West Africa, it can grow up to a staggering 15m tall. With extra large violin shaped leaves that will have heads turning, it’s no surprise that this plant is a popular choice for companies around the world.

If it’s a fast growing plant you’re after, the Philodendron Scandens (or ‘Sweetheart Plant’) will tick all the boxes. Native to Central America and the Caribbean, this exceptional plant offers a unique aesthetic that you won’t find with traditional trees. The shape of its leaves remind people of hearts, which is why they are popular anniversary and Valentines gifts. For this reason, there may already be some on the desks around the office. Versatile to a tee, it’s impossible not to enjoy an office plant that shows off without needing a lot of maintenance in order to do so.

Like what you've read? Drop us a mail to see how we can brighten up your office space!